Services typically need to call one another. In a monolithic application, services invoke one another through language-level method or procedure calls. In a traditional distributed system deployment, services run at fixed, well known locations (hosts and ports) and so can easily call one another using HTTP/REST or some RPC mechanism. However, a modern microservice-based application typically runs in a virtualized or containerized environments where the number of instances of a service and their locations changes dynamically. 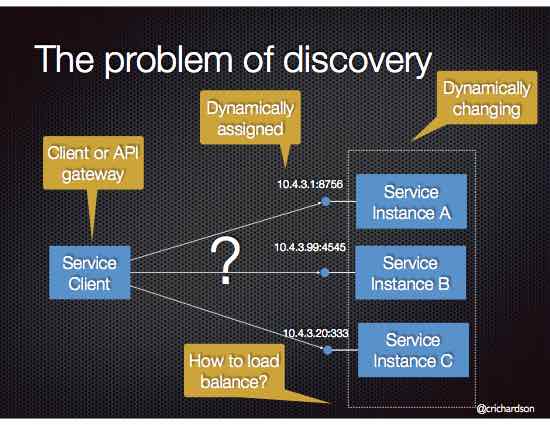 Consequently, you must implement a mechanism for that enables the clients of service to make requests to a dynamically changing set of ephemeral service instances.

When making a request to a service, the client makes a request via a router (a.k.a load balancer) that runs at a well known location. The router queries a service registry, which might be built into the router, and forwards the request to an available service instance.

The following diagram shows the structure of this pattern. 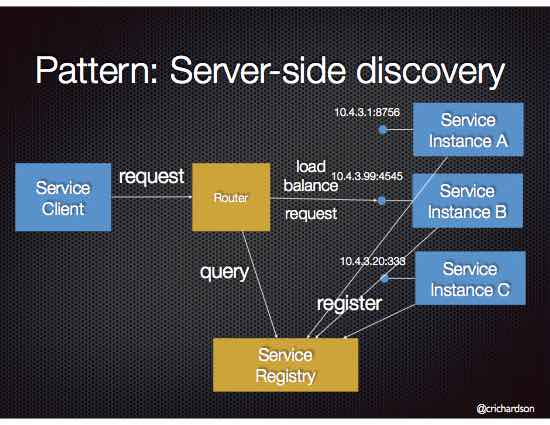 An AWS Elastic Load Balancer (ELB) is an example of a server-side discovery router. A client makes HTTP(s) requests (or opens TCP connections) to the ELB, which load balances the traffic amongst a set of EC2 instances. An ELB can load balance either external traffic from the Internet or, when deployed in a VPC, load balance internal traffic. An ELB also functions as a Service Registry. EC2 instances are registered with the ELB either explicitly via an API call or automatically as part of an auto-scaling group.

Some clustering solutions such as Kubernetes and Marathon run a proxy on each host that functions as a server-side discovery router. In order to access a service, a client connects to the local proxy using the port assigned to that service. The proxy then forwards the request to a service instance running somewhere in the cluster.

Server-side service discovery has a number of benefits:

It also has the following drawbacks:

Chris teaches comprehensive workshops and training classes for executives, architectures and developers to help your organization use microservices effectively.