Containers, the developer workflow and the test pyramid

I recently retweeted the following:

Dependencies can/should run in containers for consistency but development of the service should happen locally. https://t.co/xLUrsTxuK8

This must have resonated with some people because it was retweeted and liked quite a few times.

However, not all reactions were positive:

Actually, one of the biggest killers of developer productivity is the inconsistency of local development environments and/or difficulty of setting one up. So this statement is nothing but a wild opinion.

Docker is a great way to provide a standardized development environment

Traditionally, one major challenge with setting up a developer’s environment is installing and maintaining all the necessary infrastructure services, such as databases and message brokers. Some infrastructure services are tricky to install. Keeping every developer’s environment up to date and consistent is error-prone and time consuming. Fortunately, Docker-based tools, such as Docker Compose or Kubernetes, provide a very convenient infrastructure-as-code solution.

These configuration files are versioned, which guarantees that each developer has the correct versions of the infrastructure services. And, starting the services is simply a matter of running docker-compose up -d or a kubectl apply -f ..., which will automatically download and run the service containers. Docker/Kubernetes is the last piece of infrastructure that you need to install. Let’s now look at when you might package a service as a Docker container during development and testing.

The test pyramid is a good guide for the kinds of tests that you need to write. At the base of the pyramid are the fast, simple, and reliable unit tests. At the top of the pyramid are the slow, complex, and brittle end-to-end tests. Like the USDA food pyramid, although more useful and less controversial, the test pyramid describes the relative proportions of each type of test. 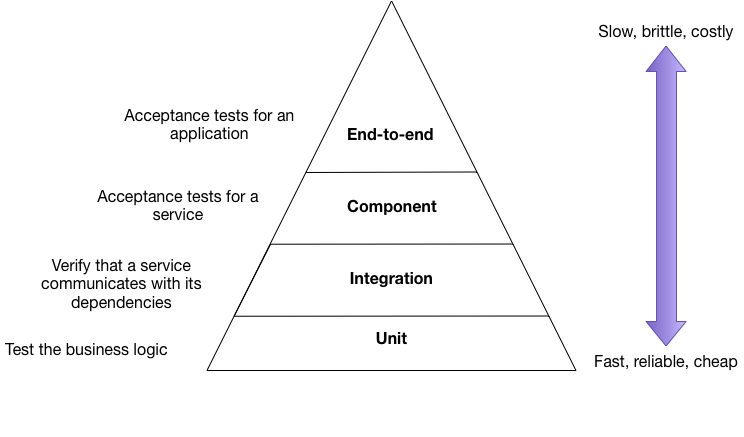 The different layers of the pyramid are as follows:

The key idea of the test pyramid is that as we move up the pyramid we should write fewer and fewer tests. We should write lots of unit tests and very few end-to-end tests. Let’s look at which kinds of tests for a service that can use Docker.

The most fundamental developer workflow is the edit-build-run-debug loop. You make a change, build the code, run some tests (the Compile Suite), debug it, repeat. If you are doing TDD, this loop begins with writing a test. In a modern IDE, you can build the code and run the tests with a single keystroke.

It’s important for this loop to be as fast as possible. In particular, you want to minimize the build time and the test execution time. You need to be as far down the test pyramid as possible. You want to avoid building and testing the service as a whole. And, you certainly shouldn’t build Docker containers.

If, however, you are developing an adapter class, which interacts with a message broker or the database then you clearly need more than unit tests. Fortunately, this doesn’t mean building and testing the entire service. Instead, you can run integration tests that verify the behavior of just the adapter class. There is still no reason to build and run a Docker container. In the FTGO application, for example, OrderJpaTest is an integration test for the OrderRepository JPA repository class.

Component tests can use Docker

It’s only when you get to the third level of pyramid - the component tests - does it make sense to run the service-under-development as a Docker container. A component test verifies the behavior of a service by invoking its API (or its UI) It typically tests the service in isolation by using test doubles for the services it depends on.

If you are using Docker in a production, it makes sense for the test to package the service as a Docker container image. Finally, there is a step of development workflow that involves building a Docker image for the service!

The FTGO application has an example of this approach to writing component tests. The following diagram shows the design of the out of process component tests for the Order Service.

End-to-end tests verify the behavior of the entire application. They deploy the application in a test environment and invoke either its API or UI. It makes sense for the tests to use the same deployment mechanism, such as a Docker orchestration framework, that is used in production.