One such loosely coupled architecture is the microservice architecture. It’s an application style that structures an application as a loosely coupled set of services. Decompose by Subdomain and Decompose by business capability are patterns for identifying services and organizing them around business functionality. But what’s the relationship between services and teams?

One approach is a shared ownership model where multiple teams to work on each service as necessary. For example, each team might be responsible for implementing features that span multiple services. On the one hand, this approach aligns teams with the user experience. But on the other hand, it increases the amount of coordination needed between the teams. Also, the lack of code ownership increases the risk of poor code quality.

A better approach, which increases team autonomy and loose coupling, is a code/service ownership model. The team, which is responsible for a business function/capability owns a code base, which they deploy as one of more services. As a result, the team can freely develop, test, deploy and scale its services. They primarily interact with other teams in order to negotiate APIs.

A team should ideally own just one service since that’s sufficient to ensure team autonomy and loose coupling and each additional service adds complexity and overhead. A team should only deploy its code as multiple services if it solves a tangible problem, such as significantly reducing lead time or improving scalability or fault tolerance.

Since a team must be small, its cognitive capacity is limited. In order for the team to be productive, its code base should be scoped to not exceed the team’s cognitive capacity. In other words, it must ‘fit’ in the team’s heads. As a result, there is an upper bound on the size and/or complexity of a service.

What’s the relationship between teams and services?

Each service is owned by a team, which has sole responsibility for making changes. Ideally each team has only one service: 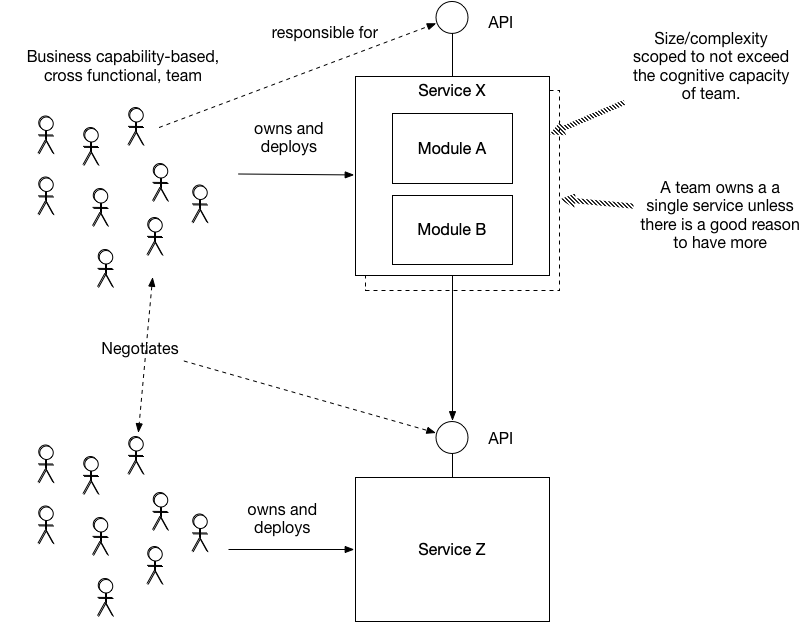 Each team is responsible for one or more business functions (e.g. business capabilities). A team owns (has sole responsibility for changing) a code base consisting of one or more modules. Its code base is sized so as to not exceed the cognitive capacity of team. The team deploys its code as one or more services. A team should have exactly one service unless there is a proven need to have multiple services.

This pattern has the following benefits:

This pattern has the following drawbacks: