When designing an application’s architecture there are numerous decisions that you must make. For example:

When working with clients, I’m often asked “What’s the best way to do X?”. Almost always, my answer is “It depends!”. Specifically, the best solution depends on the specific context within which you are trying to solve the problem. Sadly, there’s not silver bullet.

Instead, I recommend using criteria based on dark matter and dark energy to evaluate a potential solution or to compare multiple candidate solutions. Dark matter and dark energy are mysterious concepts invented by astrophysicists in order to explain certain astronomical observations. Dark energy is an anti-gravity that is forcing matter apart and accelerating the expansion of the universe. Dark matter is an invisible matter that has a gravitational effect on stars and galaxies. As I described in my iSAQB and Mucon presentations, I use them as metaphors for the repulsive and attractive forces that must be resolved when designing an architecture.

Before talking about how to apply the metaphors of dark matter and dark energy, I want to first talk about two inter-related concepts: system operations and subdomains.

About system operations and subdomains 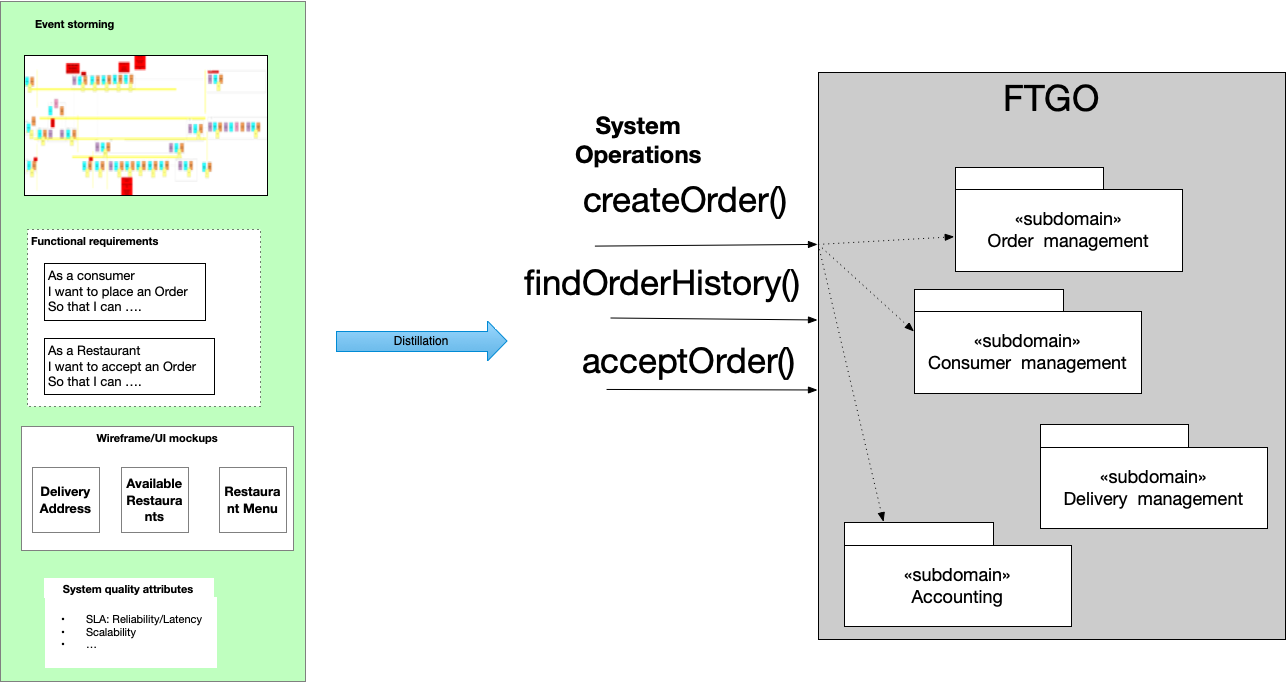 An application’s subdomains comprise the logical (a.k.a. development) view of its architecture. We also need to consider the implementation view, which defines how those subdomains are packaged as components, which are executable/deployable units.

The implementation view defines the application’s modules and components. A module is a compiled and packaged subdomain. A component is an executable or deployable and consists of one or more modules. In a Java application, a module is a JAR file and so each subdomain would be packaged as a one or more JAR files. A Java component is a WAR file or an executable fat JAR file. that contains a collection of JAR files.

Given the above definitions of subdomains and components, the problem of defining (the implementation view of) an architecture becomes

This is where the metaphors of dark energy and dark matter can help.

About dark energy and dark matter

Astrophysicists invented the concept of dark energy to explain why the expansion of the universe, which was previously slowing down, started to accelerate 7 billion years ago. The theory is that as the universe expanded gravity weakened and eventually dark energy, which is an anti-gravity repulsive force, became dominant and accelerated the expansion. Dark energy a useful metaphor to explain the repulsive forces that encourage the partitioning of subdomains into more than one service.

When astrophysicists looked at orbits of stars in distant galaxies, they discovered that they moved faster than expected based on the amount of visible matter. To explain this discrepancy, they invented the concept of dark matter, which is an invisible form of matter that exerts a gravitational attraction. It’s a useful metaphor for the attractive forces in a microservice architecture that resist decomposition into services. These attractive forces that act on subdomains are generated by system operations that span those subdomains. 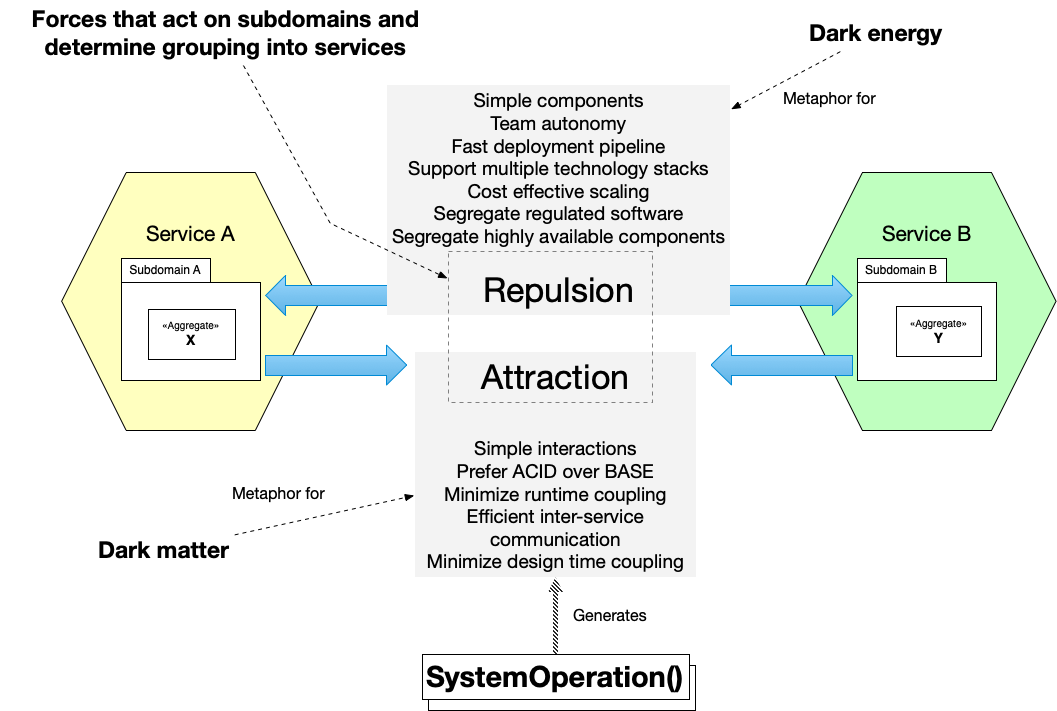 There are several forces that act on subdomains and encourage the partitioning of subdomains into multiple services:

These repulsive forces act on subdomains and encourage them to be packaged as separate services. However, they aren’t the only forces you must consider. You must also consider attractive forces.

There are the following attractive forces that resist decomposition:

The strength of the attractive forces that an particular system operation generates depends on two factors:

Sometimes, you can reduce the strength of those forces by redesigning the operation. Alternatively, you might need to repartition the subdomains.

To learn more about dark energy, dark matter and microservices

I provide consulting and training to help you use the microservice architecture effectively.