The previous post described the second step of the refactoring process, which consisted of splitting the ftgo database schema and defining an ftgo_delivery_service schema.

The third step of the refactoring process is to define a standalone Delivery Service and deploy it.

The following diagram shows the design: 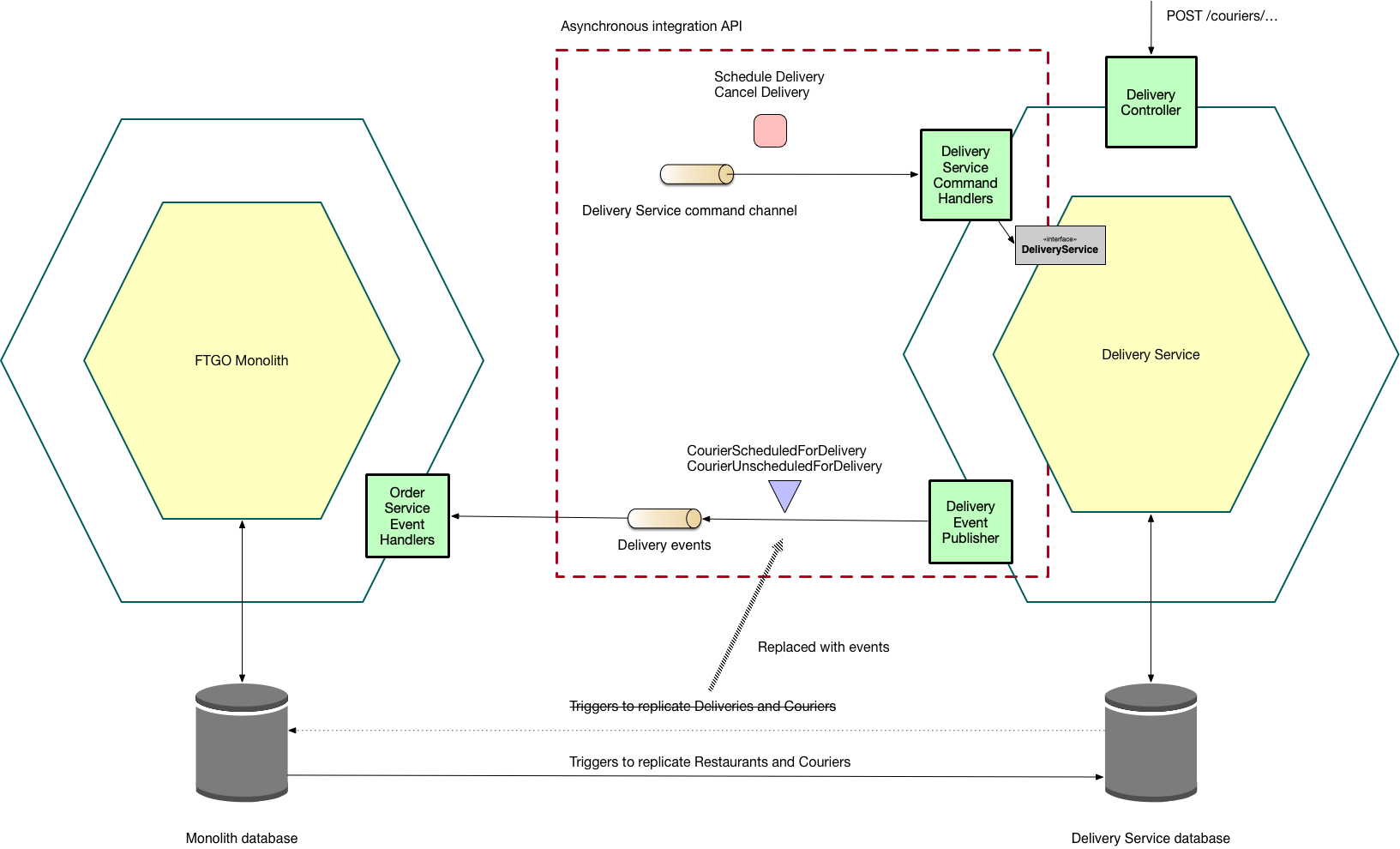 The Delivery Service’s API consists of: 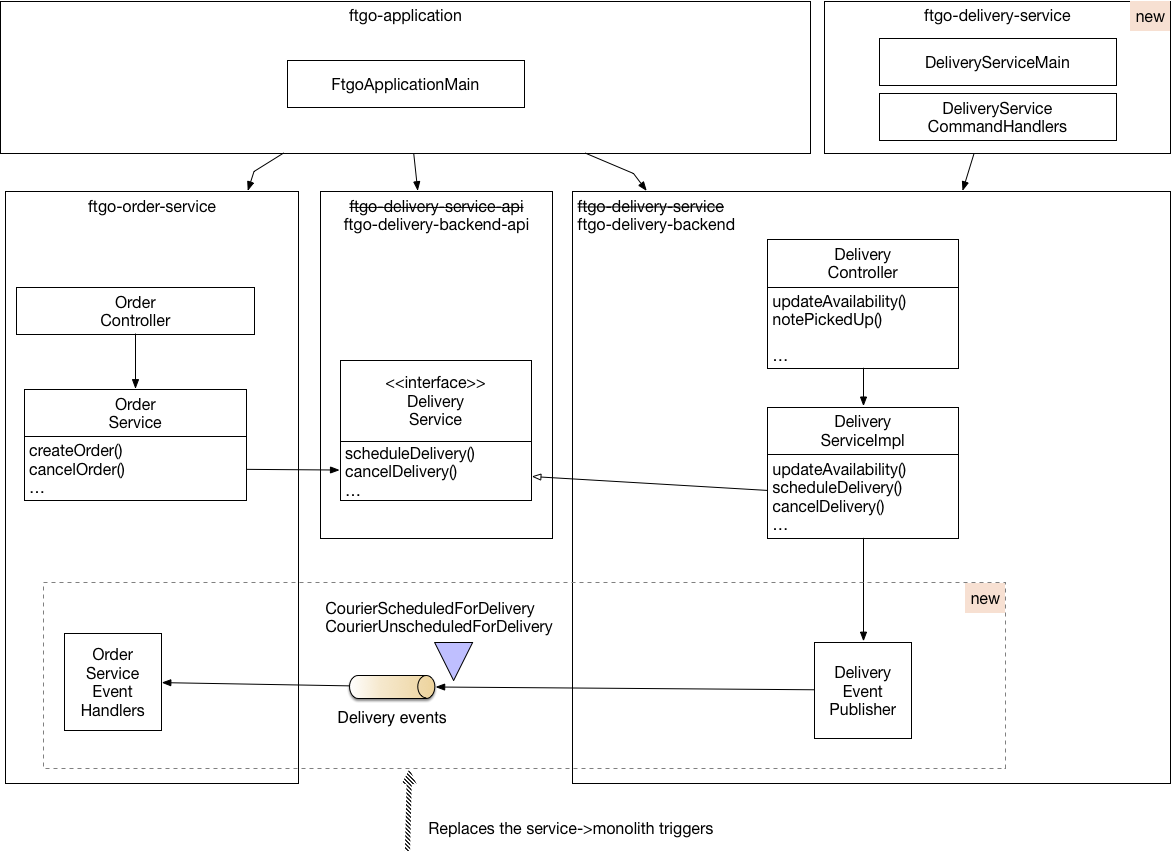 There are the following modules:

The event-based data integration glue is implemented by classes in the following modules:

Since these modules are part of the FTGO monolith, it uses the same event-based mechanism internally.

Why replace triggers with events?

One benefit of using triggers to synchronize two databases is that it doesn’t require any changes to the code. The synchronization is handled entirely by the database. A significant drawback, however, of using triggers is that it results in tight design-time and runtime coupling between the two databases. There is design-time coupling between the database, because a trigger has knowledge of both databases. There is also runtime coupling since both databases are updated within a single transaction.

Another drawback of using triggers is that the coupling makes it difficult to test the newly extracted service in isolation. Consider, for example, a test that verifies that the Delivery Service correctly processes a ScheduleDelivery command message. If a trigger replicates updates to a Courier’s schedule from ftgo_delivery_service database to the ftgo database then the test must correctly setup that database as well.

A much better approach is to use events to replicate changes. The Delivery Service can, for example, publish domain events when it updates a Courier’s schedule. The FTGO application subscribes to those events and updates its database.

An event-based replication mechanism has the following benefits:

It also has a couple of drawbacks. The first drawback of using events is that you need to change the application code to publish and consume events. In particular, modifying all of the places that publish events in a monolithic application might be prohibitively time consuming and error-prone.

In the future, the FTGO application might use events. But for now, we’ll just change Delivery Management to publish events it’s a relatively small change that makes it much easier to test the Delivery Service.

Because the Delivery Service uses events rather than triggers to replicate changes to the FTGO application it’s straightforward to test the service in isolation. DeliveryServiceComponentTest implements a component test for the Delivery Service. The following diagram shows how this test works: 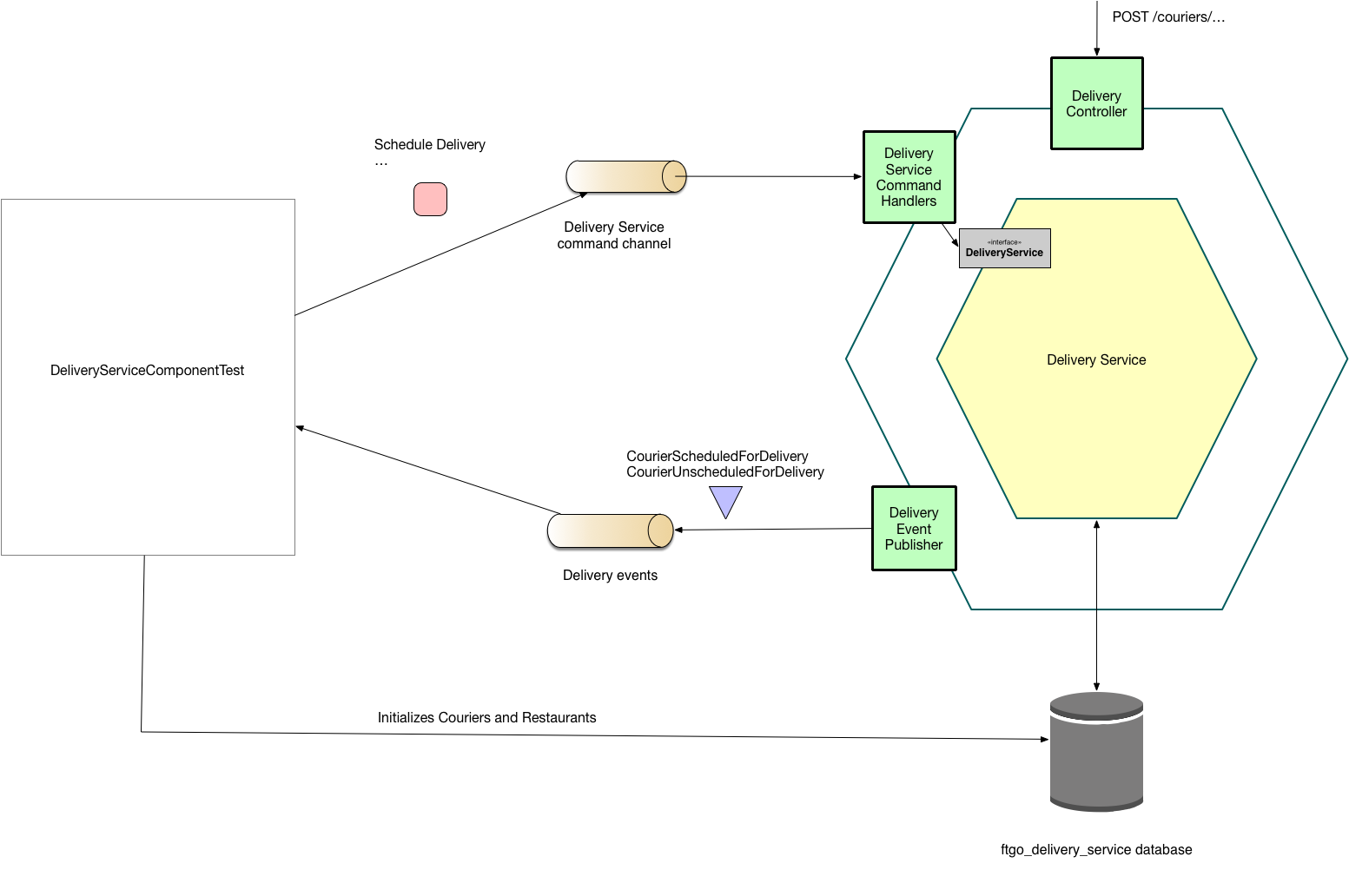 It sets up couriers and restaurants (normally replicated from the ftgo database via triggers) using JPA. DeliveryServiceComponentTest then sends a command message to the Delivery Service and asserts that it publishes the expected events.

Like the FTGO application, the Delivery Service is a Spring Boot application that is deployed a Docker container. The ftgo-delivery-service/Dockerfile file defines the container image. The docker-compose.yml file defines at ftgo-delivery-service container along with the infrastructure services needed for transactional messaging: Apache Zookeeper, Apache Kafka, and Eventuate Tram CDC.

These changes are in the extract-delivery-service-03-define-service branch and consist of the following commits:

The regular price is $395/person but use coupon AYYUXAPF to sign up for $320 (valid until Feb 17th, 2022). There are deeper discounts for buying multiple seats.